Google Alerts Doesn't Work. Why Did Google Break It, and what is the best alternative?

According to Google, with Alerts “You can get emails when new results for a topic show up in Google Search. For example, you can get info about news, products, or mentions of your name."

And indeed that’s what it used to be. But that’s not true anymore. Not since 2012.

The Most Useful Tool On The Internet

The story begins with Naga Sridhar Kataru. He was born in 1975 in a small farming village in southern India. What set him apart from his peers was his passion for learning. Encouraged by his father, a school principal, he graduated college with a degree in computer science and engineering and subsequently enrolled in the Indian Institute of Technology.

In 2000, at age 25, Google hired him as their 40th engineer. In an interview for CNN, he said it was there that he developed his creativity. “There was so much freedom to explore and invent," he said.

And invent he did. In 2003, he got tired of manually checking Google News for developments in the US invasion of Iraq. In the spirit of a true engineer, he decided to automate it. He put together a set of scripts that would email him whenever a new story matching his query broke. He showed his work to his manager, but the project was shot down. “He said Google makes money when people come to us. If we set alerts, then we’re losing money because we’re sending people away from Google”, recalls Kataru.

Not one to give up easily he escalated and went straight to Sergey Brin and Larry Page. They loved it and gave him the green light. He got to work and acquired four patents along the way. Six months after starting links to what was then known as News Alerts were added to Google Labs and Google News.

In 2008, eight years after being hired, Kataru quit his job and became an almond farmer in California. 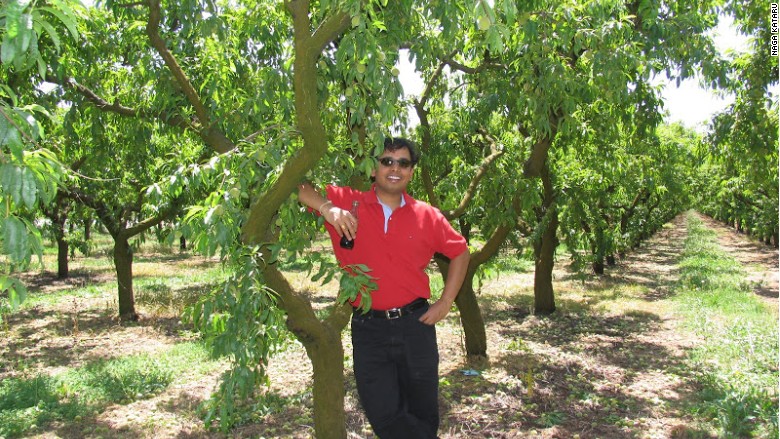 Kataru enjoying a cold beverage on his farm

But Google continued his work and released Web Alerts - a second, similar tool that tracked changes to web pages.

Google Alerts was born in 2010 as a merger of News Alerts and Web Alerts. Subsequently, Google Groups support was also included.

It quickly became one of Google’s most useful tools. Contemporary internet wisdom of the time suggested that you should monitor your name and the name of your business with Google Alerts, which millions of people did.

Around 2012 many users started to report that Google Alerts is “broken”. After realizing the breakage was far from temporary, and perhaps even deliberate, in 2013 The Financial Brand issued a widely circulated open letter to Google. It said:

Starting sometime last year, The Financial Brand started receiving fewer and fewer Google Alerts. And when the Alerts did arrive, they contained fewer and fewer results. It’s gone from lots of Alerts to many, to some, to a few… down to a trickle. Users can forget about creating any new Alerts - those pretty much won’t work at all. Indeed the volume of Alerts has decreased by at least 80%, dropping from 20-35 emails per day with 4-12 results each down to 4-8 emails per day with 1-3 results each. And the results are crummier than ever.

The Financial Brand has frequently encouraged bank and credit union marketing executives around the world to use Google Alerts. This advice is now fully retracted. Google Alerts was once a very important and efficient tool to monitor mentions of your brand on the web. It is now so unreliable that it has been rendered effectively useless.

The article cites numerous other users venting their frustration with the service’s degradation and Google’s refusal to provide a meaningful answer.

An article in Forbes echoes that sentiment:

The company whose name is almost always followed by the modifier “the search giant” is slipping. I’ve long advised people to put a “Google alert” on their name as a very simple way to monitor what’s being said about them online. That’s no longer good advice.

And cites a vague response from a Google spokesperson:

“You’re right, we’re having some issues with Alerts not being as comprehensive as we’d like”.

You can test it yourself. Set Google Alerts to monitor a keyword and then post something to reddit.com/r/test. It won't find it. For Reddit Alerts that actually work please try Syften.

To understand Google’s seemingly mysterious policies and behaviors concerning Alerts it’s useful to recall the story of another one of their news-related services.

Google Reader, described as a “river of news”, was created in early 2005 by Googler Chris Wetherell and it went live later that year.

As an RSS feed aggregator, it allowed users to read news stories and blog posts from sources they picked themselves. The tool gained a cult following and when Google announced it will shut Reader down it caused a large stir on the internet. Alas, the #savegooglereader movement and a change.org petition with over 100,000 signatures did little to sway their decision. Their spokesperson replied to it just as vaguely:

“We’ve given an overview of our reasoning and plans on our blog posts on the Official Google Blog and the Google Reader blog, and we’ll be communicating directly with our users as we make these changes”.

Coincidentally, Reader was shut down in 2013 - just months after Alerts' mysterious breakage.

Google And The News Industry

Why did Google cripple and shut down two products that so many relied on and loved? Without providing a good reason they left millions wondering. But we in 2020 can take advantage of the benefits of hindsight. Instead of analyzing press releases let’s put those events in context by learning what Google did in the following years.

Officially Google says it “cares deeply about journalism”. What does that mean exactly?

In June 2019 a study from News Media Alliance entitled “Google Benefit from News Content” made the news. It attempts to paint a picture of the history and future of online news and Google’s role in shaping it. Here are a few excerpts (edited for clarity):

Google took advantage of that trend by introducing Google News:

In 2010, Google News ranked ninth on the list of most popular news websites as measured by average monthly unique visitors by Nielsen, with CNN being third and The New York Times being fifth.

As of May 2018, Google News had approximately 150 million unique monthly visitors in the U.S., superseding top news publisher sites such as Huffington Post (110 million), CNN (95 million), and The New York Times (70 million).

They expanded their reach to mobile:

In 2017, YouTube added a “Breaking News” section at the top of users' feeds on the homepage to display authoritative news videos. In 2018, YouTube invested $25 million in grants to support the online video capabilities of news organizations and formed a working group of newsrooms dedicated to developing new products for journalists.

On its official blog Google shows us its perspective:

In the world of print, publishers pay newsstands to display their newspapers and magazines so readers can discover them. Google provides this benefit to publishers at no cost. This creates real value: In Europe alone, people click on the news content Google links to more than 8 billion times a month - that’s 3,000 clicks per second we drive to publishers' own websites. For large news publishers, a study by Deloitte puts the value of each click between 4-6 euro cents.

In 2018, Google sent more than 14 billion dollars to publishers around the world.

Back to Google Alerts and Google Reader

Sending 14 billion dollars to publishers doesn’t happen by accident. It took consistent, systematic work to achieve what Google did with the News. Not only have they managed to become the source of truth for a lot of people, but they managed to make a hefty profit while at it too. But not without affecting the way the news looks.

Ryan Holiday, in his bestselling book, Trust Me, I’m Lying: Confessions of a Media Manipulator observes:

Follow a story through Google News and you’ll see. The service begins by displaying twenty or so main news stories from which a reader may choose. I may read one article, or I may read five, but I likely will not read all, so each one vies for my attention - to scream, in so many words, “Pick Me! Pick Me! Pick Me!”. Google News displays the story from a handful of outlets under each of those bold headlines. If the main headline is from CNN, the smaller headlines underneath may be from Fox News or the Washington Post or Wikipedia or TalkingPointsMemo. Each outlet’s headline screams “Pick Me! Pick Me!” and Google alludes to the rest of the iceberg lurking beneath under these chosen few: “All 522 news articles.” How does one stand out against five hundred other articles? Its scream of “No, Pick Me! Pick Me!” must be the loudest and most extreme.

No wonder they killed Reader. Why make it easy for the user to get content directly from their preferred news publishers, if instead they can be made to open five links, each one driving ad revenue and strengthening Google’s position?

No wonder they crippled Alerts. Why make it easy for the user to get just the news they’re interested in if instead they can be tempted with juicy, emotion-stirring headlines, distracting them and stealing the asset all online companies are vying for - their attention.

If you're looking for Reddit, Twitter Alerts or any of the other community monitoring that we support, please check out Syften.