A user with the nickname there was banned by Paul Graham himself after posting this:

The account there belonged to Joshua “jcs” Stein - as an OpenBSD developer and the maker of PushOver, he was a prominent figure. 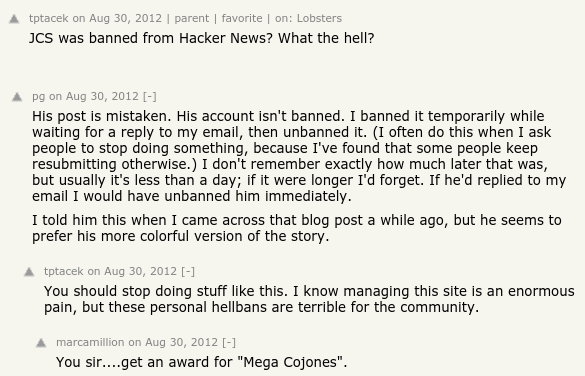 OpenBSD itself was created then Theo de Raadt was banned from NetBSD. Perhaps inspired by that, it wasn’t surprising when jcs announced: “I’ve since created lobste.rs based on some ideas I’ve had for a tech news site." The site was launched on July 3rd, 2012, just three weeks after the ban.

Though less popular it is better organized. One thing that he improved was transparent moderation and tags. The community focuses on technical subjects only (while Hacker News allows politics). It was designed to be a better Hacker News alternative.

Joshua no longer moderates lobsters and Peter “pushcx” Harkins took over. The community focuses purely on technical subjects like programming and operating systems. Other topics are banned without mercy.

To create an account you need to be invited by an existing member.

This is Paul Graham's stance on the subject:

Titles on HN are not self-expression the way comments are. Titles are common property. The person who happens to submit something first shouldn’t thereby get the right to choose the title for everyone else.