You Should Get Yourself Banned

My friend used to have a saying: “if you’ve never missed a flight, you’re wasting too much time at the airport”.

Recently, a master marketer by the name of Harry Dry came into my attention. He wrote how he got 20,000 subscribers in one year for marketingexamples.com.

Now, everybody can see his success with all the glory and the fame. But behind every success there is a string of failures. Let’s have a look at his.

Some of his posts gained a lot of traction: 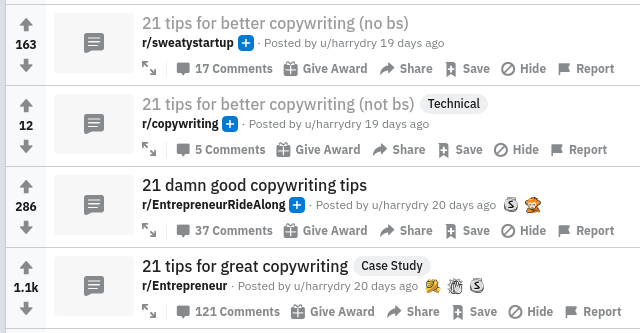 But many more went unnoticed:

And in fact, some even got deleted by moderators:

The same happens on Hacker News:

Being successful naturally attracts a fair amount of haters, like this guy:

In these situations he either ignored them, or answered patiently and politely. But the one thing that he didn’t do was to stop posting.

It appears that the key to Harry’s success was to develop a thick skin, ignore the haters and the bans, and keep on hustling.

Sometimes, before I publish a story I feel fear. “Maybe they’ll hate it, maybe I’ll get banned, maybe nobody will read it." Then I think of Harry, and hit that submit button.

If you never got banned, you’re not hustling hard enough.

And in case you’re wondering, I have haters too. Here is one:

You'll never be a business with that attitude buddy

And again, the worst possible thing I could do as a result of comments like this is to stop posting.